Cobbold Gorge is Queensland’s youngest gorge, set amongst an ancient landscape. It all began 1,700 million years ago. Sand and mud sediment was deposited on what was then the ocean floor, until eventually layers built up to be more than 10 kilometres thick. Movement in the Earth’s crust caused the sediments to compress, forming the Hampstead Sandstone. Further movement caused the sedimentary rock to fracture. Torrential wet seasons over many years, spilled torrents of water through the narrow fractures, creating deep gorges and permanent springs and seepages.

Minor movement in recent times (estimated to be 10,000 years ago rather than millions!) have contributed to the formation of the lower reaches of Cobbold Gorge, as it is today. The gorge itself is unique, as it narrows to just 2 metres in places and is set amid rugged sandstone formations, occupying an area of about 80 square kilometres. This narrowness indicates that Cobbold Gorge is the youngest known gorge in Queensland today. Evidence of the geological processes are clearly visible. It’s surrounded by spectacular cliffs, which are 19 metres high from the waterline to the top of the escarpment (30 metres from the bottom of the water to the top of the escarpment).

In order to protect this fragile environment, access to Cobbold Gorge is by guided tour only. The interpretive tours provide visitors with an insight to an ancient geological story, which continues to unfold each day. Download a more detailed geological history of Cobbold Gorge, as prepared by the Geological Society of Australia, on the below link. 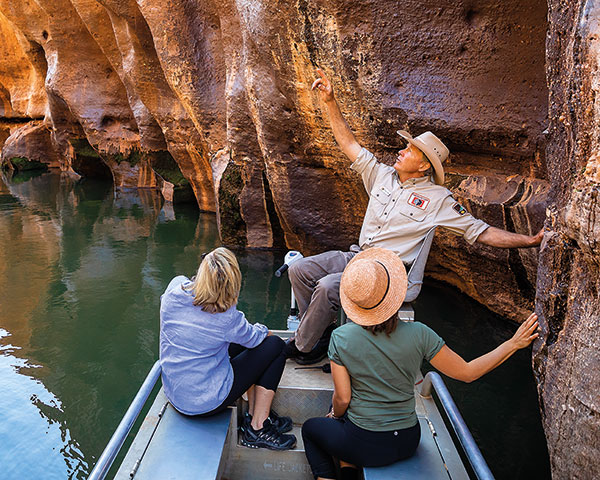